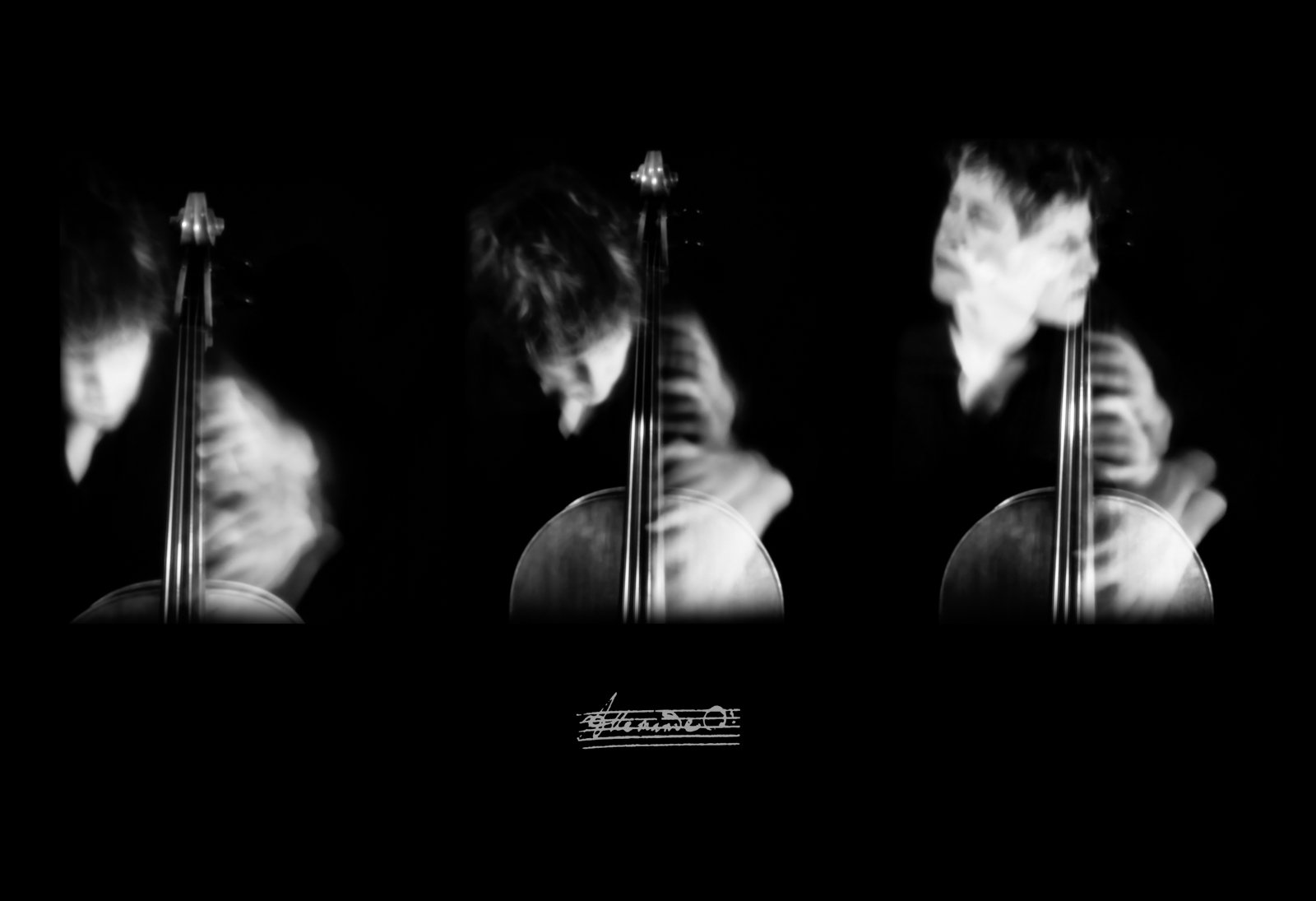 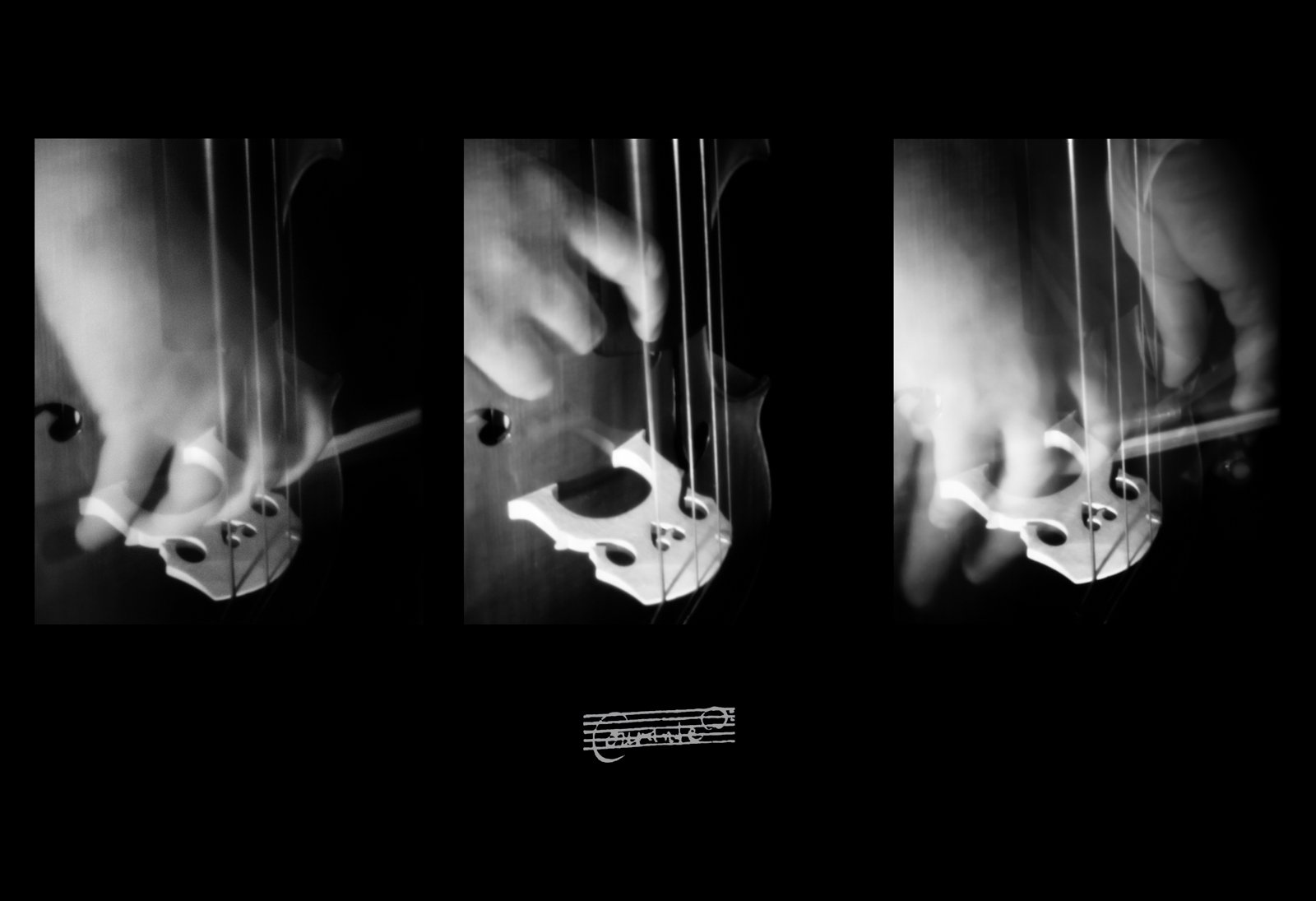 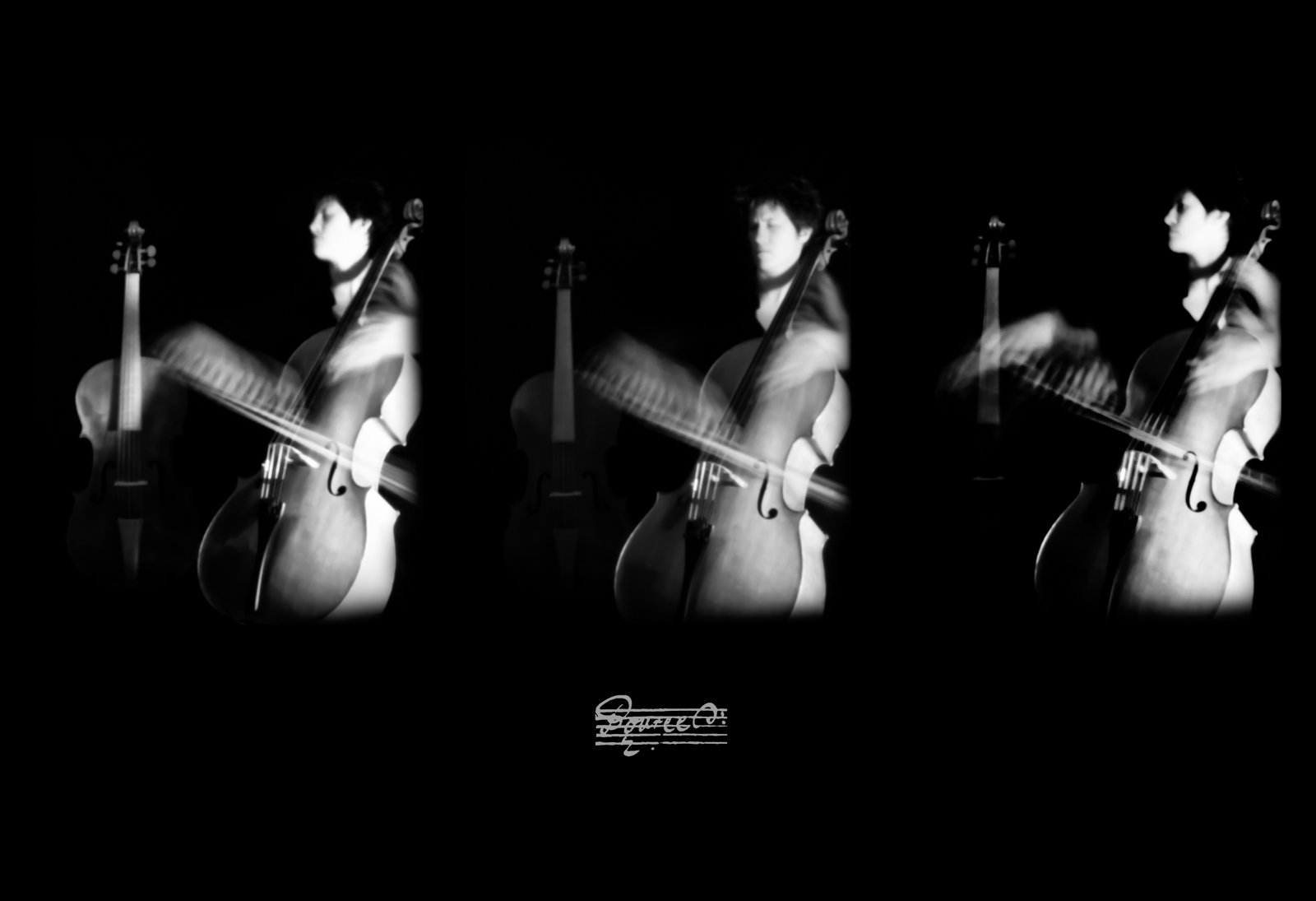 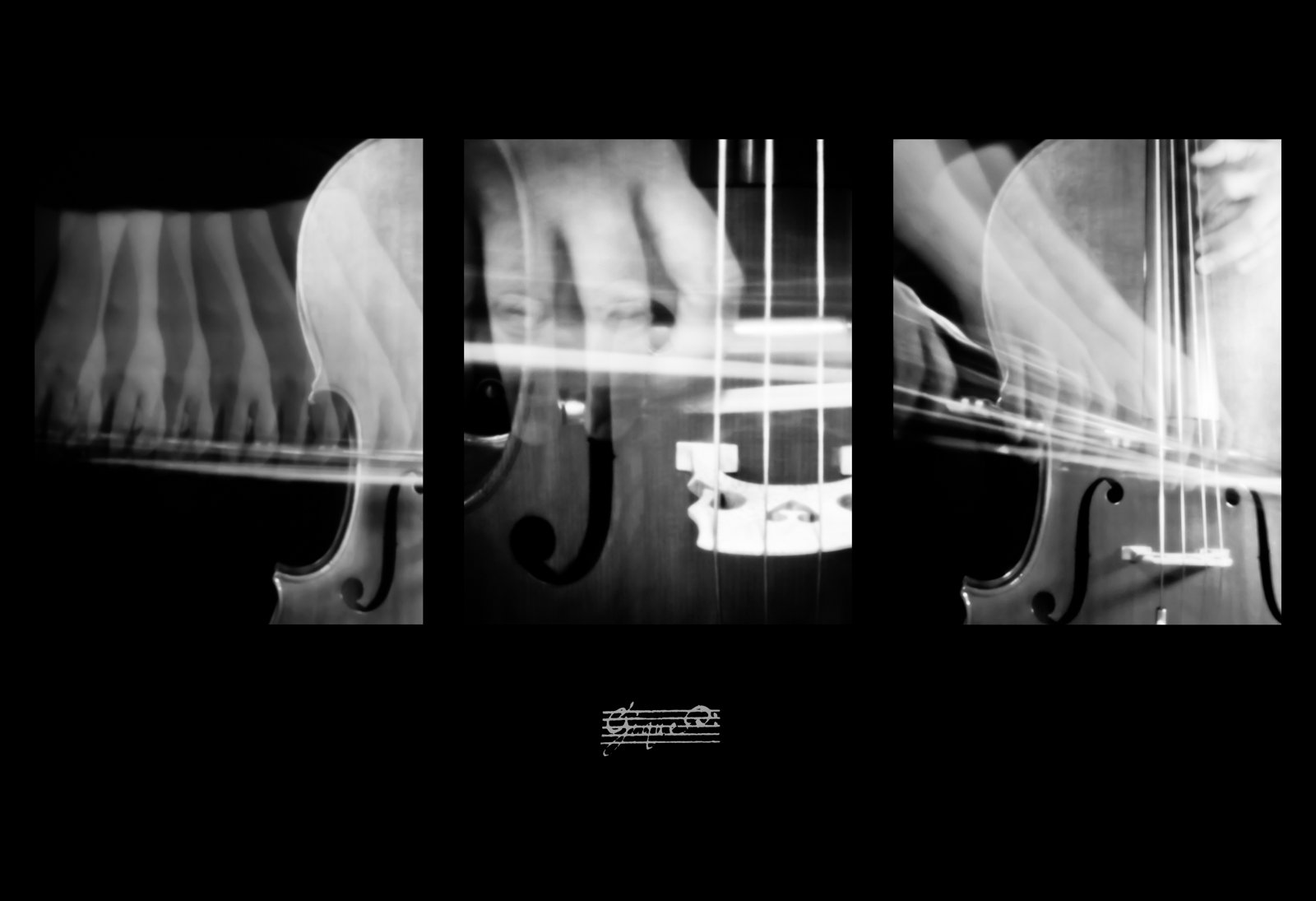 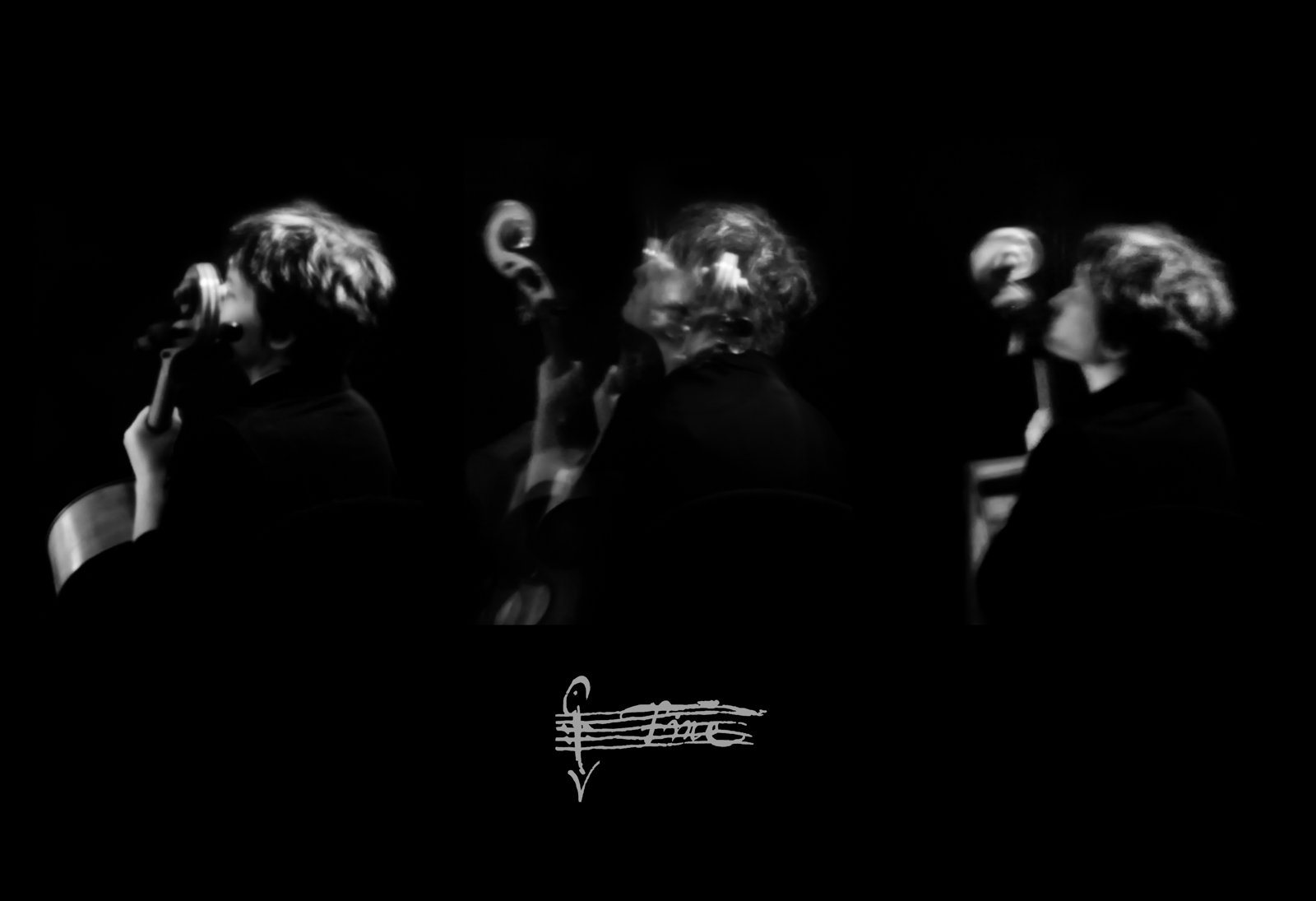 A Suite of Triptychs

Making reference to the six suites for unaccompanied cello by Johann Sebastian Bach, this series of self portraits represents my life-long love affair with the cello. It is unaccompanied in that these are self-portraits, they represent a lone cellist, and show how the cello transports me to another place where I am all alone with the music and the instrument. In addition, these works represent the universal experience of the musician with his or her instrument. Many instrumentalists view their instruments as being almost animate rather than inanimate objects. We have relationships with these instruments. And yes, sometimes we even fall in love with them.

Like each of the six suites, my images are presented as a series of six movements: a prelude establishing the key and mood of the suite plus six dance movements (one as a pair of dances*). In addition I have added a final “Fine”** image to complete the work, balancing the introductory prelude movement and presenting ideas about my relationship with the cello. Like so much music, each of my works is in three parts, each presented as a triptych. Like the Bach suites on which these photographs are modeled, each of my triptychs aims to convey a different mood or feeling. But like the Bach, my suite of triptychs use similar visual vocabulary across each movement.

To better capture movement, I chose to use a pinhole body cover on my digital camera. This allowed me to have 30-second exposures and show the passage of time – both the physical and temporal movement of music. In these images you can see bow and left hand movement as well as cellistic gestures. Some of these are not actually gestures I tend to make, but are more universally associated with cellists, and in particular, cellists lost in the art of making music. To further this idea of the more universal nature of the experience of musicians, I chose to make my images in black and white, using strong contrast. I also chose to process the noise intentionally created by a high ISO and long exposure to create a more painting-like, almost brush stroke texture. This processing, along with the movement shown with the long exposures, removes most of specific facial features from the self portraits. However I chose a few pieces of these triptychs which clearly show me as the cellist. This helps to place my experience within the more universal one portrayed in the less specific images.

To create a clear parallel with Bach’s six suites for unaccompanied cello, I scanned titles from a facsimile in the hand of Bach’s second wife, Anna Magdalena. As the originals in Bach’s own hand do not survive, cellists often turn to this edition to learn more about the pieces. Written c.1720, these works fell out of the standard repertoire of the cellist until Pablo Casals (1876-1973) discovered a copy, studied the the suites for twelve years, and then started performing them. Before Casals, cellists knew about the suites, but viewed them more as pedagogical works rather than performance repertoire. I first heard the suites when my parents gave me a boxed set of LPs by Pablo Casals not long after I started playing the cello in 1978. Not long that, my parents gave me a boxed set of LPs with the suites played by Yo-Yo Ma. I did not start playing these works until about 1982, but from that time onward, they have been the cello pieces I love most among all cello works. In 1996 I commissioned a maker to build me a 5-string instrument, so that I could play the 6th suite (properly) – the sixth suite was written for a five-string cello. In 2006, my “number came up” on the luthier’s list, and I went back to England to collect my new “Bach” cello.

I would love to show these images in a gallery and associate them with recordings in the display. It would be ideal to use sound cones with motion sensors, so that when a viewer approached an image, the appropriate part of the suite plays. For an opening of the show, I would love to perform all six suites.

* In these suites, the paired dance movements vary: Suites 1 and 2 have Menuets, 3 and 4 have Bourees, and 5 and 6 have Gavottes. My choice to use the Bourees rather than the other dance forms had more to do with the aesthetics of Anna Magdalena’s handwriting on the facsimiles than with the musical forms themselves.

This website uses cookies to improve your experience while you navigate through the website. Out of these, the cookies that are categorized as necessary are stored on your browser as they are essential for the working of basic functionalities of the website. We also use third-party cookies that help us analyze and understand how you use this website. These cookies will be stored in your browser only with your consent. You also have the option to opt-out of these cookies. But opting out of some of these cookies may affect your browsing experience.
Necessary Always Enabled

Any cookies that may not be particularly necessary for the website to function and is used specifically to collect user personal data via analytics, ads, other embedded contents are termed as non-necessary cookies. It is mandatory to procure user consent prior to running these cookies on your website.